HAHA! This is a long ass post, so take a deep breath and feel free to laugh.

Let me set the scene. If you didn’t read the last post you won’t know that a couple of weeks ago I flew to Middle Island from 1770, QLD on a tiny propeller plane. The plan was to go kayaking, motor boating, fishing, bush walking, lighthouse climbing, oyster collecting, crabbing and caving. Instead, I got very drunk on the first night and fell out of my tent which was erected on waist high stilts.

And it turns out I broke my ankle. In two places.

On top of that, because I didn’t go straight to hospital, I managed to severely dislocate the broken bones, resulting in a desperate need for pretty major surgery. Obviously, I didn’t know any of this was happening. Sure… it hurt, but I told myself that it was just a sprain and for the next forty eight hours I crawled, hopped and cadged piggy backs from my (absolutely ridiculously brilliant and amazing) little brother.

So let’s rewind to day 29, Monday 29th June 2015. I’d managed to half crawl, and half be carried, to the little plane that had arrived to pick us up and take us back to Agnes Waters. The flight wasn’t as painful as I thought it might be and thankfully Woody took it easy with us, meaning I had a mostly pleasant time aside from landing. At the other end, I scooted out and hopped a safe distance from the plane. Then I just had to wait for Guy to get back and ‘bring the car around.’

Whilst I was waiting, I thought I’d try pressure on my foot again. It didn’t hurt too much (weirdly) but it crumpled, cracked a little and I ended up face planting the floor again. Though this time not in a writhing, drunken and blubbering mess.

I think this was the moment that I started wondering whether I should visit a doctor. But the crippling fear of not yet having Medicare and how much this would cost if I needed plaster was enough to make me brave it… for now. I know right… stupid.

The short drive back to Agnes Waters petrol station got me thinking again. Every time we turned a roundabout I felt as though I was being dragged to the fiery pits of hell via my melon sized ankle. I was in agony.

I waited for an hour at the medical centre there. Where they charged me AUS$70 to tell me (before I had even removed my support bandage) that my ankle was fucked. When we did remove it, the doctor went on to explain that it was definitely broken and very, very likely to need surgery. It was ‘deformed’ with ‘bony tenderness.’

He sent me with a letter to Gladstone hospital, about an hour and a half drive away. Here we all waited another two hours to be seen by another doctor, get an x-ray and be administered A LOT of morphine into my majestic thunder thighs (which haven’t lost any weight since getting here by the way, Mum).

This was when it dawned on me that I didn’t have knickers on.

Ahhh, shiiiiit. I’m not wearing pants under these trousers. And I’ve not showered for three days. This is going to be grim.

The realisation of my no pantsness was almost as crippling as the break itself, and I remained a violent shade of tomato whilst I dropped my trousers and attempted to cover my none-too pleasant vagina for the poor doctor.

By 11PM I was laid up in bed with a back slab, two Dominos pizzas (seasoned with my own salty tears), and preparing for probably the worst night’s sleep of my life. Not because of the pain, but because I was convinced that the guy next door was dying.

At around 6AM I was allowed a cup of water and at 7.30AM two gloriously fit paramedics picked me up and drove me up to Rockhampton in an ambulance. The drive was pretty good, the paramedic was funny and he let me nap for twenty minutes undisturbed which really helped my state of mind when I finally got to the next hospital. It didn’t help me get his number though.

Once again, the doctors at Rocky said some stuff about it being too swollen to operate immediately but they also mentioned the dislocation and that Gladstone hadn’t corrected it before putting me in plaster. They let me sign consent sheets and I was taken to a room to be given a healthy dose of Ketamine to space me out completely whilst they snapped my ankle back into correct alignment.

Ketamine (def.): a synthetic compound used as an anaesthetic and analgesic drug and also (illicitly) as a hallucinogen.

All I remember, is closing my eyes and flying over the Noosa Everglades, which were all coloured and patterned like my new MC Hammer Pants (gold, bronze and turquoise). When I was coming to I could still see the Everglades but I could hear my nurse and I asked if anyone had even touched my foot yet. To which she said ‘Yes! Everything is over!’ and suddenly I could see the hospital lights above me… and no amount of blinking was bringing back my beautiful Everglades trip. I was absolutely convinced that they’d taken me on a drive to the beach and this amused everyone in the room no end.

I was still a little woozy (read: trippin’ balls) when Guy, Fliss, Jack and Katie came in to see me. I was hooked up to every single machine ever invented and I could see panic across Guy’s face… He said that I’d been screaming throughout my whole procedure and that he could hear it from the waiting room. The nurse confirmed it, but I was totally unaware of it. 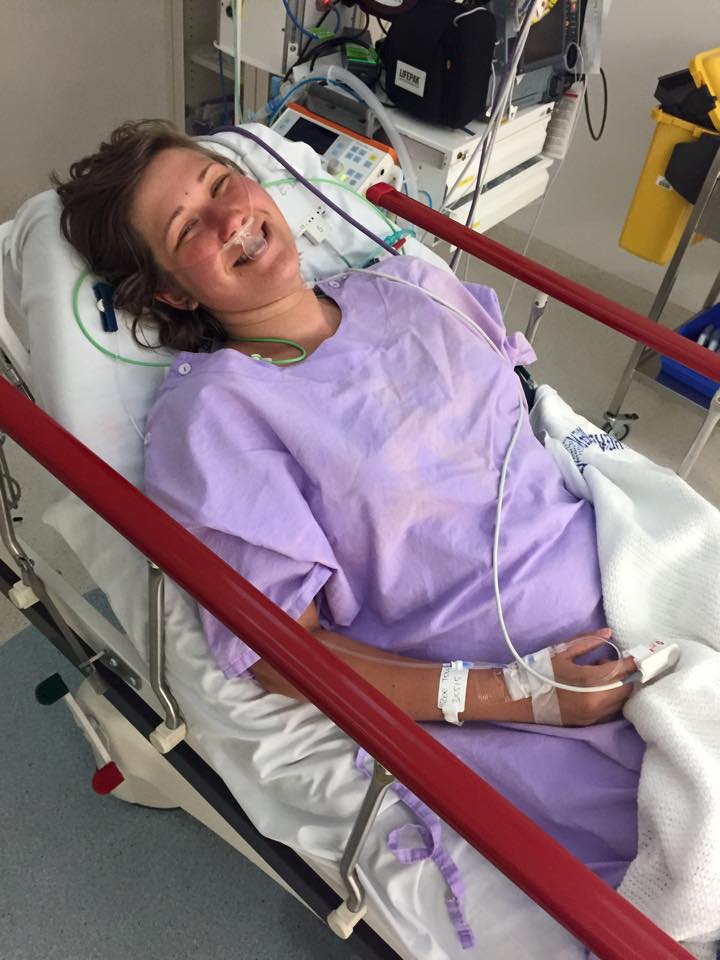 Guy collected a few essentials for me from the van and dropped Fliss off with both our things as I knew I was going to be in hospital another couple of days. Then we had a short teary goodbye as he, Jack and Katie set off on their drive to Airlie Beach for our booked Whitsundays Sailing Adventure.

THIS IS WHEN THE BAD NEWS CAME

In the short time it had taken for me to get from my room to X-Ray, my ankle had collapsed back in on itself. Everything the doctors had just done to fix it, had been undone in minutes. It was just too unstable.

Doctor: [Excuse me, Mam. Mam. Mam.] Bad news… your ankle has collapsed again. The procedure did not work. We need to put you to sleep and do full surgery to place pins and plates in your ankle. However, it is still too swollen to fully complete and we will have to add a wire frame around your leg to keep everything in place until the swelling has subsided and we can put you in plaster. You are going to be here for seven to ten days.

At this point I fully understand why my Nan (also in hospital back home) was showing signs of giving up. I had been inside for one night and I was having a bad time.

Time went by really slowly… loads of nurses came and gave me painkillers, and asked me what I’d done to myself, and asked me if I wanted drinks even though I was nil by mouth and I had to painstakingly shake my head and say no despite the fact my mouth felt like a furry cat bum.

Fliss came back and we went round and round in circles about how we were going to afford and survive in Rocky until I was fit to find work and support myself. It was tragic, so I sent her back to her motel and I tried my hardest to sleep.

THEN THE GOOD NEWS CAME

I didn’t get into surgery like they thought I would that evening and after a full day of fasting the best they could do was bring me a cheese and tomato sandwich. I figured my time in hospital was going to be somewhat like fat camp… for the third time this month.

I’d managed to locate my ear plugs before falling sleep, so I couldn’t hear Stuart’s leg pump hissing away all night from the other side of the room. Unfortunately it also meant I couldn’t hear the nurses around my bed doing a briefing for the changeover of staff in the morning. Which means, the first thing my day nurses saw of me was probably a nipple poking out of my oversized gown and a hell of a lot of saliva dribbling down my shoulder.

Sexy and I know it.

One of the nurses came back shortly after to deliver me the best news of my life so far… I was going for a shower.

A shower? WHAT? A SHOWER?! NO WAY! This is not actually sarcasm.

My last shower had been on the 26th June. Five days ago.

The nurse was great, despite her initial fear of me throwing myself out of the chair (as I did my tent). She let me into the shower on my own where I scrubbed my skin until it was sore and applied so much coconut shampoo and conditioner that I’ll be disappointed if my hair doesn’t grow from the roots with that aroma for the next five years.

(LOL, it’s just taken me five attempts to write that paragraph because I accidentally elbowed my morphine button.)

AND THEN… I went to theater. CRAZY. I was actually getting my first procedure done before 10AM!

About six different nurses, doctors and anaesthetists introduced themselves to me (at different times) and asked my full name, date of birth, if I had any allergies and how I broke my ankle. Before I knew it, I was on the table, tears pricked the backs of my eyes and a lovely anaesthetist held my hand and comforted me. I imagined she was Mum… and I slipped into sleep before I could think enough to cry my eyes out.

I woke up a couple of hours later, groggy but in a good mood. 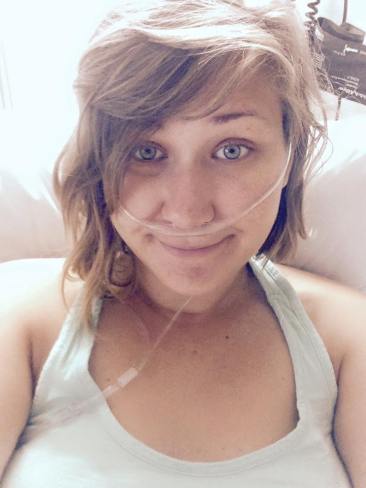 No wire frame meant that the surgery had gone better than I could have ever imagined. After putting my bones back to where they should be, the swelling in my ankle had dissipated enough for the doctors to complete the full procedure of putting in pins/plates, sewing me up and putting a back slab on.

And with that I was due to be discharged from hospital the very next day.